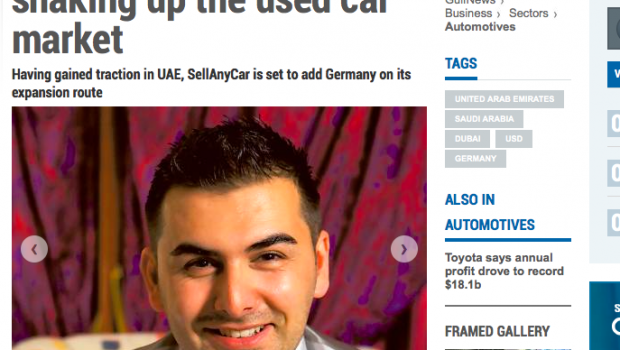 A start-up intent on shaking up the used car market

Having gained traction in UAE, SellAnyCar is set to add Germany on its expansion route

Dubai: The UAE based start-up, SellAnyCar.com, is ready to take its ‘disrupting’ technique for the used car business into a brand new territory — Germany. This would be the fourth market that the 19-month-old business is venturing into after the UAE, Saudi Arabia and Turkey.

And it has got the funds — and more commitments if required — to get things going in Germany. In fact, in the last six months it has been able to raise more than $10 million to develop its already established network and add new ones. “Used-car buying and selling is a mature marketplace in Germany, with an established database of businesses doing it the traditional way,” said Saygin Yalcin, CEO. “There are also those doing it using online processes, but I believe we can still go in and do it our way.

“I don’t think any single market we get into is going to be more difficult or easy … have you tried buying or selling a used car in Saudi Arabia? If we can do it there, I think it’s possible to do it anywhere else.”

Yalcin declined to get into specifics over the extent of the funds raised, apart from saying that “it’s in the double-digits and it’s in the millions of dollars”. But he added that there were investors who were willing to come on board for each new market. The intention is to get into a new one every six months. (Yalcin still retains the majority shareholding.) The company’s USP is deceptively simple — someone wishing to sell his vehicle can come to a designated SellAnyCar.com partner facility to get a valuation. If the live pricing quote offered by the portal matches their expectations, the deal can be done in 25 minutes flat. In the UAE, for instance, the vehicle owner can even get the money in hand (through a deal done with Al Ansari Exchange) in a matter of four hours. Or they could wait for the bank transfer to be effected.

Yalcin claims the firm has been able to edge ahead of the entrenched competition — principally, the brick-and-mortar dealerships and independent operators — in its launch market. According to him, the number of pre-owned vehicles sold in the UAE represents about 250,000 units and over, when only the “organised” part of this industry is considered. (If one were to add the unorganised category as well, those overseen by hole-in-the-wall businesses operating out of industrial areas, the figure could swell to 500,000 units.) “In 2013, our estimate for the used-car market in the UAE was about Dh2.5 billion and that it grew 10 per cent a year later,” said Yalcin. “But the new-car market is about three times that, and UAE is one of the few markets in the world where new vehicle sales trump used. That’s why there is so much potential to grow the business further.

“The reason why SellAnyCar.com was able to make it was because the way the used-car business here was broken, and it was so difficult to get anyone to take in a model that was more than four years old. The vehicle owner had to make do with any quote that was offered by the dealership. Even if he went to five different used-car dealers, he may not be able to get a proper quote.

“What we do with any car brought in for valuation is to get real-time bids from our database of traders across multiple markets. The quotes are coming in instantly, and if we get a quote higher than the base price, it is instantly passed on to the owner. Those higher quotes could come in from anywhere, both inside the UAE or outside.

“The way we buy and sell instantly means creating volumes that can override a need for high margins. To keep our costs down, we do not invest in having too many showrooms or large yards. We only have three owned locations.

“As for the vehicle owner, all he wants to be assured of is getting a fair value and in the least time possible. He’s getting that and via an iPad, including all the legal contracts.” 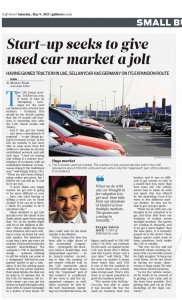