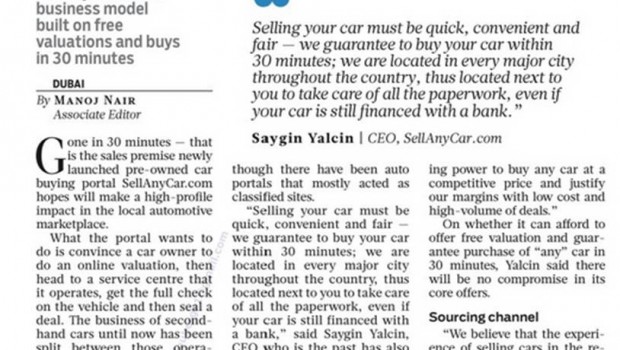 Published on January 6th, 2014 | by SayginYalcin

What the portal wants to do is convince a car owner to do an online valuation, then head to a service centre that it operates, get the full check on the vehicle and then seal a deal. The business of secondhand cars until now has been split between those operations from the country’s many dealerships and those run by independent small and mid-sized firms. It is only now that a portal — SellAnyCar.com — is getting into the act directly even though there have been auto portals that mostly acted as classified sites.

“Selling your car must be quick, convenient and fair — we guarantee to buy your car within 30 minutes; we are located in every major city throughout the country, thus located next to you to take care of all the paperwork, even if your car is still financed with a bank,” said Saygin Yalcin, CEO who is the past has also been associated with Sukar.com, an online shopping club, and a partner at Jabbar Internet Group.

“We have no expensive showrooms, as we are not selling retail. We have the purchasing power to buy any car at a competitive price and justify our margins with low cost and high-volume of deals.”

On whether it can afford to offer free valuation and guarantee purchase of “any” car in 30 minutes, Yalcin said there will be no compromise in its core offers.

Locations owned by it now operate in Dubai, Abu Dhabi, Sharjah, Ajman and Umm Al Quwain. On whether actual ownership does not push up the costs, Yalcin said: “We also have strong partnerships helping us scale. Depending on the specific car, SellAnyCar.com uses its global network of partners to determine the best channel to sell through.

“Based on our numbers, there is already a huge demand for our services, similar to US or European standards, [and] even exceeding results of peers in mature benchmark markets due to the strength of the regional automotive industry.”

And when does the portal expect to attain breakeven? “Whenever… we believe it is best for the company,” Yalcin said.

“We are not looking for funding per se, but rather for strategic partners who can help us achieve our vision. Fortunately, we have significant funds available to buy any vehicle in the region.”