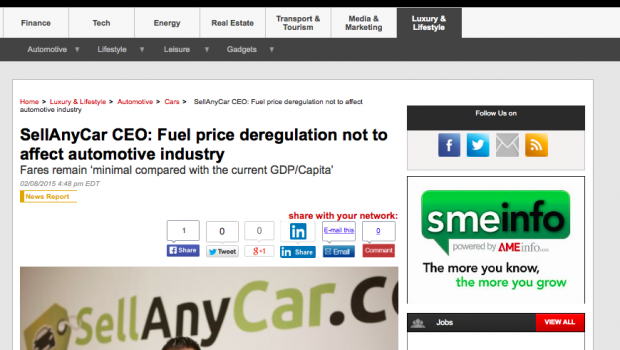 Published on August 2nd, 2015 | by SayginYalcin

Saygin Yalcin, CEO at SellAnyCar.com, the leading online car-buying service in the UAE, tells AMEInfo about the deregulation of fuel prices in the country and its impact on the automotive industry.

The government has decided to free up petrol and diesel prices and set up a committee to review prices against average international levels. The committee will announce, on the 28th of every month, the prices for the month that follows.

How has the automotive industry in the UAE performed in the first quarter of 2015?

The first quarter of 2015 saw a substantial drop in crude oil prices in the international commodity market. This reduced the surplus enjoyed by local governments as well as petrochemical companies in the region. These companies and governmental entities have tightened the purse strings on non-essential purchases, which had an impact on the sale of vehicles and resulted in lower growth in the first quarter of 2015. For SellAnyCar.com, it was a steep growth phase, nonetheless. As a marketplace, our business adapts automatically to market fluctuations.

The UAE has deregulated fuel prices. What are your thoughts about the new policy’s implications on the country’s automotive industry?

Deregulating fuel prices will help reduce fuel consumption and preserve natural resources for future generations. The main aim is to encourage individuals to adopt fuel-efficient vehicles, including the use of electric and hybrid cars. However, I believe that deregulating prices would not have a major impact on the automotive industry in the short term, as the increase is barely notable on individuals’ costs of living.

Do you anticipate a steep decline in car sales because of the new move?

The auto market is growing, but not at the same rate seen in the past year. Increasing petrol prices will have no effect on sales in the short term, as it still is minimal compared to the current GDP/capita.

Analysts say that users of gas-guzzling SUVs are going to be hit. Please comment.

The pace of SUV sales in the GCC is among the highest in the world. I believe that in order to change this, it will require much more than a price increase and at least several years.

How were the past months for SellAnyCar.com? Where is it placed now in the market?

Our volume has grown almost five times this year alone. SellAnyCar.com has proven to solve a problem for consumers by building a true marketplace and generating a win-win situation for both the industry and the general public. The website has grown to be the largest specialised car buyer in the region. SellAnyCar.com is now active in the UAE, Saudi Arabia, Turkey and Germany. In addition to that, we will soon launch in Qatar before expanding into the rest of the GCC and the Levant.

In the long term, especially when global oil prices shoot back up, the fuel price deregulation will have some impact on the automotive sector. Would you agree? Do you have any specific strategy in mind for SellAnyCar.com?

SellAnyCar.com will stick to its current strategy, as long as the changes in fuel prices do not have a disruptive effect on the general population, which might impact car ownership change rates or share of wallets.

Iran has signed a nuclear deal and sanctions are going to be lifted. As a result, a new market is opening with many opportunities. What are your thoughts on the subject? Are you eyeing the Iranian market?

Iran has always been an attractive market with its bright young population looking for further internet consumer products to help improve their lives. At SellAnyCar.com, we would like to keep all our options open, without having any specifics in mind.