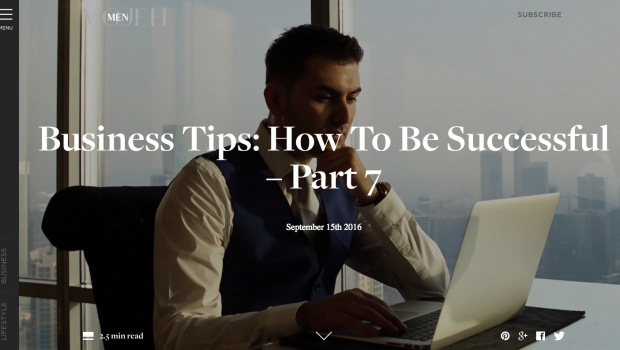 Published on September 17th, 2016 | by SayginYalcin

Business Tips: How To Be Successful – Part 7

Saygin Yalcin, CEO of Sellanycar.com, gives us his secrets to business success.
Type ‘How to be successful in business’ into Google and you’re faced with more than 700 million results.

It’s a question on everyone’s lips, from the young and hungry entrepreneur looking to make his way in the world, to the wily old businessman seeking an edge in a rapidly developing industry.

Of course, the definitive answer to this all-encompassing question can’t be found in any business manual, magazine or website, but what we at MOJEHMEN can give you is exclusive access to some of the brightest business brains in the region.

For this edition, Saygin Yalcin, CEO of the Middle East’s first and largest car buying service, Sellanycar.com, tells us why he hates sleep, values confidence and, above all, thinks that anything is possible.

My biggest time-waster is sleep. I don’t like the concept of sleeping, so I try to minimise it, but fail due to natural reasons. If you think about the fact that a smartphone needs one hour to recharge and work through 23 hours and our bodies need seven hours to work 17 hours consciously, I am quite disappointed by our progress.

No rest for the wicked

My days are usually quite busy. I often have numerous meetings to attend, hundreds of messages to deal with and I travel frequently. For each day I make sure that I have specifically planned accomplishments.

Over the past decades of my life, throughout my career, I have met thousands of different people, hundreds of different characters, tens of different cultures and nationalities, but only two different mindsets; one mindset that leads to success, the other one that doesn’t. It really boils down to a value-driven mindset of confidence and execution.

I am a course lecturer and I feel that the challenge goes some way to creating an environment that fosters a can-do culture and a belief that business and entrepreneurship is not something that one is born with, but can be learnt. A lot of my students are entrepreneurial and I try to awaken that entrepreneurship. I am just trying to show them how to make those dreams come alive.

The world is full of opportunities to change even the most deeply rooted convictions we might have. Think of quantum mechanics, for example: when this was discovered a century ago, the status quo was disrupted and classical physics was not the only game in town anymore. Particles started behaving like waves, being in super positions, and conscious observations had an influence over reality. Common sense was suddenly not applicable anymore. This is just like entrepreneurship – nothing is impossible. If the behaviour of a tiny subatomic particle can change our world, then we can too. With this mind-set, it allowed all our initially small teams to become leaders of markets that were traditionally led by huge incumbents.

If there’s one thing a businessman should never do, it is overstep the line of ethics. My advice to young entrepreneurs is to surround yourself with intelligent, ethical and ambitious people. Go out there and embrace every opportunity. You only need to hit once, but can fail many times.