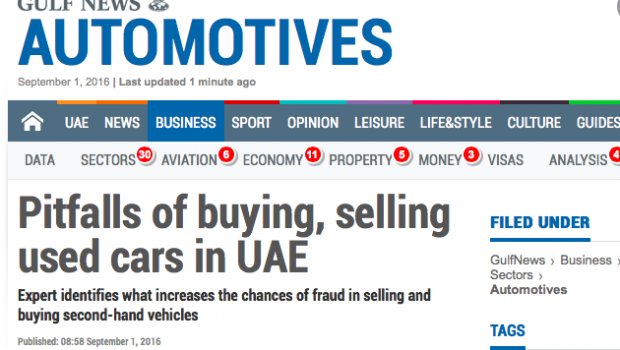 Published on September 1st, 2016 | by SayginYalcin

Dubai: Buying a second-hand car is a tempting idea, especially when brand-new models are just too pricey for the wallet and it’s difficult to get a bank to finance a purchase.

There’s been a growing number of residents in the UAE who have taken the used car route, with some dealers expecting the second-hand market to overtake the new car business within the next ten years. Arabian Automobiles had earlier reported that the market for used vehicles in the UAE went up by 20 per cent in 2014 alone.

But whether they’re buying the used dream machine or any pretty decent vehicle in the market, UAE buyers – as well as sellers – are often faced with a dilemma: there’s a huge discrepancy in prices.

A study conducted by SellAnyCar.com, a car buying service in the Middle East, found that second-hand vehicles of the same model or make carry different price tags, with the price variance ranging between 40 per cent and 50 per cent.

“The information [provided] does not explain why there is such a difference, not only because there is no 200-point checklist for every car, but also because it is totally subjective and dependent on the seller’s opinion, who in most cases is either not honest or knowledgeable enough to describe the car’s actual condition, nor charge the appropriate amount.”

Mismatched prices aren’t just frustrating to buyers, but to sellers as well, and can often lead to unsuccessful transactions.

“I have witnessed this myself. Classified websites do not allow for price education, as they are merely wishlists of sellers. At first glance, this will already lead to price differences, as every seller believes that his or her car is worth more than the listed ones,” Yalcin noted.

“This triggers a spiral effect upwards. On the other hand, however, buyers will look for the cheapest deal for the same car and end up looking at a list of cars with unrealistic prices.”

“When someone tries to sell a car on classifieds, they will look at the highest price of a comparable car and add another 1 per cent to 2 per cent to leave space for negotiation. However, when someone is trying to buy a car, they will filter for the lowest price of the desired car. This creates a gulf of expectations that results in frustration, false leads and time waste for both buyer and seller,” he added.

In fact, when it polled 6,500 car buyers and sellers, SellAnyCar found just how frustrating it is for both parties to see a huge price variance in the second-hand car market.

“Most of our respondents said that they would receive a reasonably high rate of calls from classifieds, but the quality wouldn’t be there. People would make unreasonable offers.”

He also cautioned that used car listings may not necessarily provide all the details about the real condition of the car, and this can frustrate one party or both.

“The amount of information delivered on those listings do not allow for proper evaluation of a car’s condition, assuming they were not lies in the first place. All in all, this leads to waste of time, annoyance and unnecessary meetings with strangers,” said Yalcin.

SellAnyCar.com also found that while respondents would feel comfortable selling their car back to official dealers, most sellers wouldn’t qualify for an equitable deal.

“Our respondents indicate that selling back to the dealer only works for very new cars – one or two years old. Older vehicles usually aren’t considered or any car that doesn’t fit with the dealer’s brand strategy. Even when they are, the price can be quite low as the dealer looks to underwrite its expensive premises,” Yalcin noted.

There are many other things that sellers, in particular, are frustrated about and these include a lack of knowledge regarding the necessary steps to effectively transfer a car ownership. In fact, SellAnyCar.com found that many people have transferred ownership of their cars without having a proper legal contract, leaving them at risk should the buyer not pay up.

“I made the mistake of not having a legal contract myself when I sold my car many years ago. I went to the RTA office, waited in line, and later figured out that I was lucky to have got paid. I had no legal protection whatsoever, and could have done very little if the buyer had never paid me, or had paid me less than what we’d agreed to,” he says.

Not checking the dealer’s trade licence is another common occurrence among sellers – which again increases risk of fraud. “A dealer’s trade licence needs to be current, valid and needs to list ‘Used Car Trading’ as a business activity. Dealing with fraudulent, wrongly licensed or unlicensed dealers can be risky. You might not get paid, or might retain legal liability for a car you’ve sold,” Yalcin said.

Other barriers to successful transactions include uncertainty over cars with outstanding loans, and the mechanisms to effectively transfer – or nullify – registrations, Salik accounts and insurance.

“Our recent research shows that buyers and sellers are still facing hurdles to transacting effectively in the used or pre-owned car space through conventional channels,” Yalcin said.