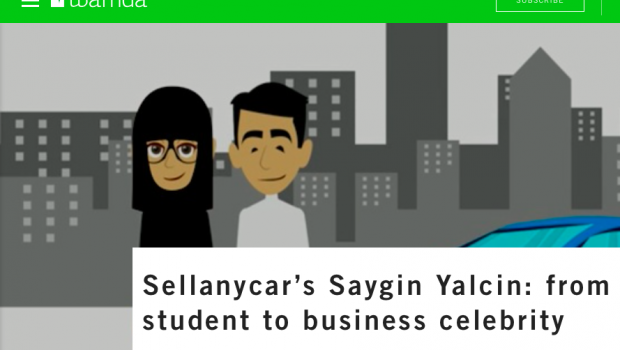 Published on November 17th, 2016 | by SayginYalcin

With more than 140,000 subscribers, Yalcin’s channel offers viewers blunt startup advice as well as unapologetic documentation of his glamorous lifestyle –  from birthdays with the Kardashians to PlayStation downtime with RnB superstars.

Since he landed in Dubai seven years ago, Yalcin has touted himself as a ‘serial entrepreneur’ and a thought leader in the region’s startup ecosystem.

“From a young student with a backpack and a dream, to someone who is thinking about giving back,” he said, describing his entrepreneurial journey to Wamda.

Yalcin is an accomplished businessman. He founded the region’s first online private shopping club in 2009, Sukar.com, and sold it to Souq.com three years later. He then become a partner at both Jabbar Internet Group and Souq.com in 2012, and set up Sellanycar.com a year later.

Three years into the highly publicized launch and growth, Sellanycar.com has skyrocketed to become the UAE’s first and largest car buying service guaranteeing 30-minute sales deals – a promise that is sometimes contested by disgruntled customers.

Yalcin’s venture fast-tracked its growth in late 2015 with an announcement of its expansion into the German market, backed by $10 million raised in only six months. Soon after, Yalcin’s sought a $1 billion valuation for his company, with plans to raise as much as $100 million to fund a Europe takeover.

He is now looking at growing the company’s core roster of products to include complementary business models. “Our next move will be serving not only the buying side, but also the C2C [customer-to-customer] facilitation models,” he says.

With this track record, Yalcin feels that he’s done and learned enough to give back to the startup community.

But in the grand scheme of things, it is about the macro-economic movement. “If you want to solve the unemployment issues in the region, and grow to a metropolis like Dubai and like the UAE is planning to become, then you can only do so through entrepreneurs – not natural resources for sure,” says Yalcin.

Startup Hero received over 10,000 applications. All are classified by Yalcin into four categories: totally traditional models that do not qualify for venture capital; overly ambitious ideas that fail on viability, plausibility and unit economics; lukewarm commitments to bringing ideas to life; and lastly, ideas that are already owned by big players and that would require massive financing to overtake incumbents.

“A very common example would be the ‘Arab Facebook’ – adding a feature or filter for Facebook,” says Yalcin, adding that the ‘Uber for X’ trend is far from revolutionary.

So where are regional entrepreneurs missing the mark? Yalcin says it is often their inability to attribute proper market research and projections to their business ideas. He also sides with regional investors who are often criticized for their risk aversion.

Very few past quality exit deals have enabled investors to liquidate profits. What’s more, regional investors’ money is becoming competitive globally. Regional startups are fighting over funds not only among each other, but among a much wider pool of Silicon Valley and European entrepreneurs. And in assessing them, investors have different risk management approaches; investors from the US, for example, look more at market and team risk.

Looking back at his own learnings and mistakes, he has one key advice for startups: keep the top line growing, but not at the cost of unit economics.

Between three factors prioritized by startups in the early stages, Yalcin says the top line is the least important one.

“The second, unit economics, is extremely important and should never be neglected. In the first 90 days, it is what you have to prove to get investment. The third one, which most VC-backed entrepreneurs try to delay as much as possible, is profitability.”

A strategic decision that entrepreneurs would best consider carefully if they want to be less dependent on VC money.

“[Ultimately] the number one reason why startups fail is because they run out of money. And then they get desperate to raise funds and do so under horrible conditions and terms. You want to prove to me that your business is successful, show me that your company can turn profitable,” he says.