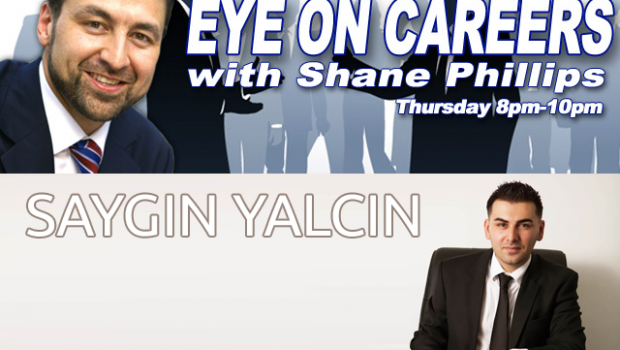 Published on October 7th, 2013 | by SayginYalcin

Click here to listen to the interview: Saygin Yalcin on “Eye on Careers” show – October 2013

Saygin Yalcin is a German entrepreneur with Turkish descent. He is best known as the Founder & CEO of SellAnyCar.com, Founder of the first and largest online private shopping club in the Middle East, Sukar.com and Partner at Jabbar Internet Group, the holding company that emerged through the sale of the world’s largest Arab online community Maktoob.com to Yahoo! in September 2009. Saygin is also Partner at Souq.com Group, the largest ecommerce company in the Arab world owning companies, such as Souq.com, CashU.com and QExpress. Moreover, Saygin is Academic Lecturer of Entrepreneurship and Ecommerce at the Canadian University of Dubai, United Arab Emirates.

In 2011, Saygin has been awarded as one of the United Arab Emirates’ Hot 100 personalities and, in 2012, nominated for the country’s “Personality of the Year” award by ITP, the UAE’s largest publishing group.

Something you wouldn’t know about Saygin is he wanted to become an aesthetic plastic surgeon and conducted a voluntary internship as a nurse. One day in a surgery in a central hospital in Germany his fellow nurse and boss said, before she fired him — “You would be the worst doctor, but the best business man”.

And that’s where it all started for Saygin Yalcin.

Tune in every Thursday evening from 8pm and kick-start your weekend with career advice that could give your professional path a much needed boost. Every week, Shane Phillips, a leading executive search consultant, will chat to the regions’ leading CEOs and businessmen, charting their own personal success stories and providing those all-important occupational tips. It’s also a chance to step in to the Career Clinic, with real life case studies and world class management strategies to help combat career crises and to get guidance on how best to rise through the employment ranks. And if you’d like to be involved in the show, then send your questions, queries or very own quest for career contentment to 4001. Alternatively, you can mail eyeoncareers@dubaieye1038.ae.

Tune in Thursday evenings from 8pm-10pm.

The show will also be repeated on Saturday mornings from 8am-10am.

“There is no such thing as a career path. There are a series of opportunities and it is how you react to those opportunities that defines whether or not you succeed.”

“I believe people should build skills sets that are “spikey” — unique skills and knowledge which can collectively create a mosaic of complementary profiles that deliver real value that people are willing to pay for. This is what transforms you into ‘human capital’, as distinct from a simple ‘human resource'”.

“There should be a seamless fit between an executives capabilities and their strategic direction. Too often people are busy chasing opportunities in the market rather than allowing the opportunities which exist inside themselves to grow and blossom, and that is where true value creation lies.”

Here’s what some of our listeners have to say about Eye on Careers:

“I am writing from Spain, where I live, and where I regularly listen to Dubai Eye. I find it really very entertaining, and I feel one gets a very positive input. On this side of the world, because of the financial crisis, the media are quite the opposite, so tuning in to Dubai and its radically different reality is both refreshing and encouraging!”

“It’s a pleasure to write you while I am listening to your broadcast from gym in Sydney. Being a regular listener and indeed highly inspired by your valuable advices in the career clinic show you run every week.”