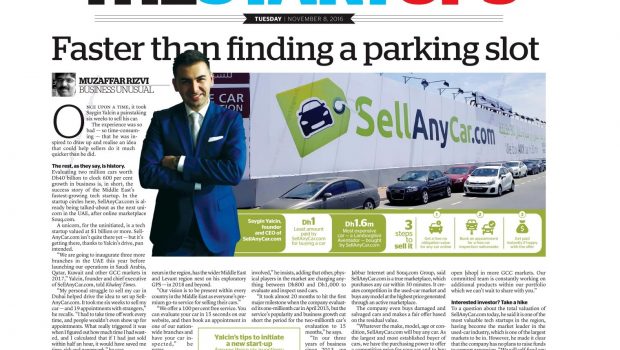 Published on November 8th, 2016 | by SayginYalcin

SellAnyCar.com is already being talked about as the next unicorn in the UAE

Once upon a time, it took Saygin Yalcin a painstaking six weeks to sell his car.

The experience was so bad – so time-consuming – that he was inspired to draw up and realise an idea that could help sellers do it much quicker than he did.

The rest, as they say, is history.

Evaluating 2 million cars worth Dh40 billion to clock 600 per cent growth in business is, in short, the success story of the Middle East’s fastest-growing tech startup.

In the startup circles here, SellAnyCar.com is already being talked-about as the next unicorn in the UAE, after online marketplace Souq.com.

A unicorn, for the uninitiated, is a tech startup valued at $1 billion or more.

SellAnyCar.com isn’t quite there yet – but it’s getting there, thanks to Yalcin’s drive, pun intended.

“We are going to inaugurate three more branches in the UAE this year before launching our operations in Saudi Arabia, Qatar, Kuwait and other GCC markets in 2017,” Yalcin, founder and chief executive of SellAnyCar.com, told Khaleej Times.

“My personal struggle to sell my car in Dubai helped drive the idea to set up SellAnyCar.com. It took me six weeks to sell my car – and 19 appointments with strangers,” he recalls.

“I had to take time off work every time, and people wouldn’t even show up for appointments. What really triggered it was when I figured out how much time I had wasted, and I calculated that if I had just sold within half an hour, it would have saved me time, risk and paperwork,” he says.

He claims that his Dubai-based startup has already become the region’s largest online used-car buying service provider, and is among a handful of tech companies that have the potential to break the $1 billion barrier.

“A car is being evaluated by SellAnyCar.com every minute, with an evaluation taking place every 15 seconds on our record days,” he boasts.

“Our vision is to be present within every country in the Middle East as everyone’s premium go-to service for selling their cars,” he said.

Yalcin, who is considered one of the youngest and most successful Internet entrepreneurs in the region, has the wider Middle East and Levant region next on his exploratory GPS – in 2018 and beyond.

“We offer a 100 per cent free service. You can evaluate your car in 15 seconds on our website, and then book an appointment in one of our nationwide branches and have your car inspected,” he notes.

His company’s ‘free-of-charge’ service promises to evaluate, inspect and conclude a deal within 30 minutes.

“This whole process is absolutely free and there are no obligations and hassles involved,” he insists, adding that other, physical players in the market are charging anything between Dh800 and Dh1,000 to evaluate and inspect used cars.

“It took almost 20 months to hit the first major milestone when the company evaluated its one-millionth car in April 2015, but the service’s popularity and business growth cut short the period for the two-millionth car’s evaluation to 15 months,” he says.

“In our three years of business since 2013, we have evaluated almost two million cars at a value of Dh40 billion,” he adds.

Yalcin, who is also founder of the first and largest online private shopping club in the Middle East, Sukar.com, and partner at Jabbar Internet and Souq.com Group, said SellAnyCar.com is a true marketplace, which purchases any car within 30 minutes.

It creates competition in the used-car market and buys any model at the highest price generated through an active marketplace. The company even buys damaged and salvaged cars and makes a fair offer based on the residual value.

“Whatever the make, model, age or condition, SellAnyCar.com will buy any car. As the largest and most established buyer of cars, we have the purchasing power to offer a competitive price for your car and to buy it straight away,” he says.

Yalcin maintains that SellAnyCar.com started with a single promise of guaranteeing to purchase any car within 30 minutes, and now the company has grown to become the largest specialised car buyer in the country.

“We have grown over 600 per cent and will further grow by expanding our marketplace; in the next phase, we will open [shop] in more GCC markets. Our committed team is constantly working on additional products within our portfolio which we can’t wait to share with you.”

Being the fastest and most convenient car buying service, Yalcin said it is important to be reachable to our prospective clients within the shortest possible time, no matter what the customer’s location is.

“Looking at our growth rates since launch, we are actually the largest car buyers in the UAE as of today. SellAnyCar.com’s new branches are already open in Dalma Mall and Wahda Mall, Abu Dhabi. The new Dubai location is at Arabian Centre.”

“We believe that Sellanycar.com will become inevitable for selling used cars in a fast, fair and convenient manner. Our mid-term goals are to further expand geographically and also add to our product portfolio which will cover more aspect within the automotive business.”

To a question about the total valuation of SellAnyCar.com today, he said it is one of the most valuable tech startups in the region, having become the market leader in the used-car industry, which is one of the largest markets to be in.

However, he made it clear that the company has no plans to raise funds to support expansion. “We will self-fund any expansion plans,” Yalcin says categorically.

To a question about today’s conducive environment for startup with the fast development on technology front, he says: “Definitely, the regional infrastructure for entrepreneurship has improved, not only by efforts of the respective governments, but also due to international development such as technology implementation.”

About the challenges SellAnyCar.com faced since its launch, he said: “Not surprisingly being a fast growing startup, we have faced challenges in growing the team as fast as required, we are constantly looking for world-class talent to continue to deliver higher standards of customer satisfaction,” Yalcin concludes. 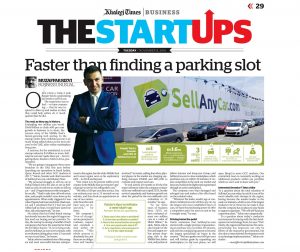