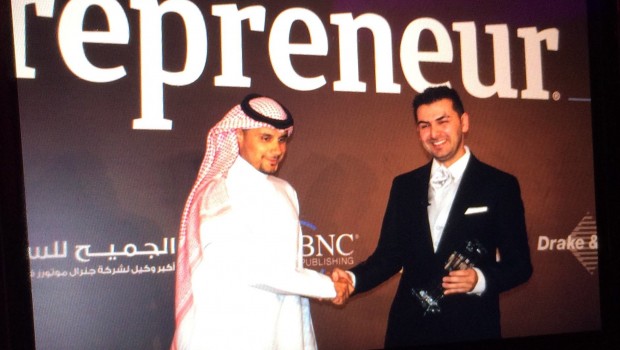 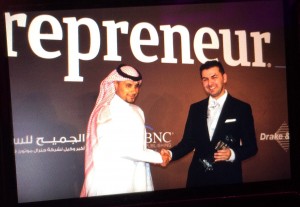 SellAnyCar.com has been awarded Tech Innovator of the Year in Saudi Arabia! Organised by Entrepreneur magazine ME, the award aims to recognize and honor enterprise leaders and individuals who have distinguished themselves and demonstrated innovation and outstanding business conduct across 20 industries including retail, healthcare, construction, hospitality, aviation, education, banking, energy amongst other key drivers of Saudi Arabia’s economy.

With the presence of Prince Khaled Bin Alwalid Bin Talal, the award was presented by Khaled Al-Mugairen, Vice Chairman of Riyadh Chamber of Commerce and Industry.

UAE-based entrepreneur receives ‘Tech Innovator of the Year’ award13 June 2015SellAnyCar.com was launched in 2013 as a small Dubai-based start-up. Dubai: Saygin Yalcin, founder and CEO of SellAnyCar.com and a visiting lecturer at Canadian University Dubai (CUD), was named ‘Tech Innovator of the Year’ at the Saudi Arabia Enterprise Agility Awards 2015 recently.Organised by ‘Entrepreneur Magazine Middle East’, the Awards recognise enterprise leaders and individuals who have distinguished themselves and demonstrated innovation and outstanding conduct in the business world.

SellAnyCar.com was launched in 2013 as a small Dubai-based start-up. As Saygin explains: “Selling a used car in this region used to be a lengthy and tiring process. We came up with a technology-based solution for selling used cars that makes the process easy, safe, quick and hassle free.”

“As our service offered an effective solution to all the problems of selling used cars, it attracted great attention, and in a few months, we were able to expand to other Emirates within the UAE. In 2014, SellAnyCar.com became a multinational company, opening operations in Turkey and Saudi Arabia.”

Explaining his reasons for venturing into the KSA market, Saygin said, “Saudi Arabia remains the largest importer of cars and automotive parts in the Middle East and has a market size of more than $25 billion.

“While the sports utility vehicle and luxury car markets are strong and growing driven by rising levels of disposable income, the Saudi automotive sector also has a growing used vehicle market, particularly in terms of re-exports to the wider region, as such, it is a very important market for us.”

Saygin, who regularly shares his expertise with students at CUD as a guest lecturer on the Entrepreneurship Theory and Practice programme, is also a partner in the Arab world’s largest e-commerce company, Souq.com, and considers dynamic growth as an important aspect of their competitive edge. 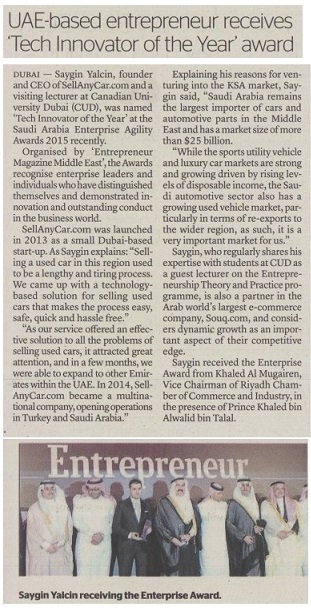