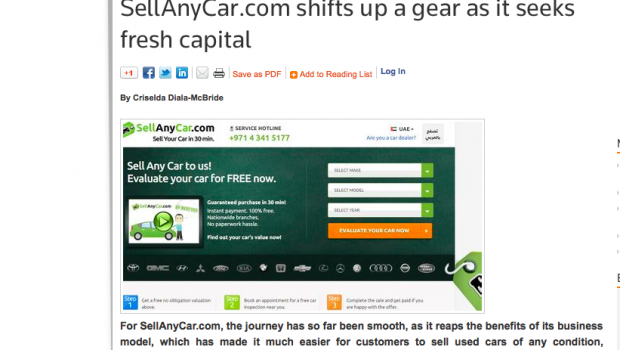 Published on August 9th, 2015 | by SayginYalcin

For SellAnyCar.com, the journey has so far been smooth, as it reaps the benefits of its business model, which has made it much easier for customers to sell used cars of any condition, according to founder and CEO Saygin Yalcin.

Since launching its business two years ago, the company has stayed in the fast lane – expanding its footprint beyond the Middle East and into Western Europe, while courting investors in the United States (US) for fresh capital injection.

“We started our operations as a small Dubai-based start-up in September 2013,” said Yalcin. “And within a year, we were able to expand to other emirates in the UAE.”

The company conducts around 300 car inspection appointments every day in various inspection stations throughout the country. To date, it has done over one million car valuations, utterly disrupting the used car market in the UAE.

SellAnyCar.com continued its expansion course by establishing presence in Turkey and Saudi Arabia in 2014. Most recently, it has also gained a foothold in Germany, where Turkish descent Yalcin was born and raised.

“One of our main plans is to focus on geographic expansion. We are hoping to have a network effect. The more locations we have and the more markets we serve, [the more] we can have a win-win situation for all participants,” the 31-year-old entrepreneur said.

Yalcin said SellAnyCar.com has met with investors in the US to help raise USD 100 million, which will be used to finance its expansion plan. The company is keen to have presence across the GCC region, in countries like Qatar and Kuwait, before moving into other more promising and lucrative markets in the Arab world and beyond.

He added that he is also hoping venture capital firms in the US will grant his start-up venture a USD 1-billion valuation, eventually elevating it to the elite “unicorn” club – a status held by just over 100 start-ups worldwide.

When asked why he chose the US to explore this funding and valuation opportunity, Yalcin said the economic giant is “the most mature venture capital market in the world, especially for internet investments”.

“US investors have had several success stories and now are able to read success KPIs [key performance indicators] much better. Those venture capitalists [also] have better access to finance and regulatory frameworks,” he explained.

Because of these factors, successful Middle East start-ups such as SellAnyCar.com – when selected by VC firms and given a USD 1-billion valuation – could have the opportunity to raise extensive funds internationally, the young entrepreneur added.

Yalcin’s energy and enthusiasm are the driving force fueling the success of his ventures. A serial entrepreneur, he was founder and partner at the region’s first private shopping club, sukar.com, a position he held from November 2009 until April 2015.

Aside from being at the helm of SellAnyCar.com, he currently serves as partner in Jabbar Internet Group, a company created in 2009 following Yahoo!’s acquisition of maktoob.com; and souq.com Group, the largest e-commerce firm in the Arab world.

He attributes his entrepreneurial success to having the ability to recognize and realize opportunities to improve large outdated industries, with modern technology.

“Industries, which are big and outdated in terms of their operations, especially where technology can bring in value and transparency for reducing market participants costs [offer the most number of opportunities for aspiring entrepreneurs in the Middle East],” he told BusinessPulse.ae.

“For green field and seed investments, most entrepreneurs will only face a challenge in raising funds if they are not diligent enough,” he said. “However, for investments [that] go beyond [single-digit] millions, especially in the Internet sphere, [entrepreneurs] will face the reality that [they] would need to go outside the region to raise that amount.”

The venture capital landscape in the Middle East is growing and opening up opportunities for several entrepreneurs in the region, Yalcin said. But challenges remain, especially when it comes to raising funds from limited partners.

“The challenge is two-fold. On one hand, venture capitalists do not find enough of those so-called ‘quality deals’. On the other hand, entrepreneurs are not enabled to grow beyond seed phase,” he commented.

This, he added, is particularly difficult for entrepreneurs who lack the proven track records and extensive network of international investors. In the end, “most of them will have to shut their businesses if they could not prove phenomenal growth in their first few years”, he said.

“Moreover, only a tiny fraction of the regional banks’ loan books are dedicated to SMEs. Banks are not startup oriented at all,” Yalcin said.