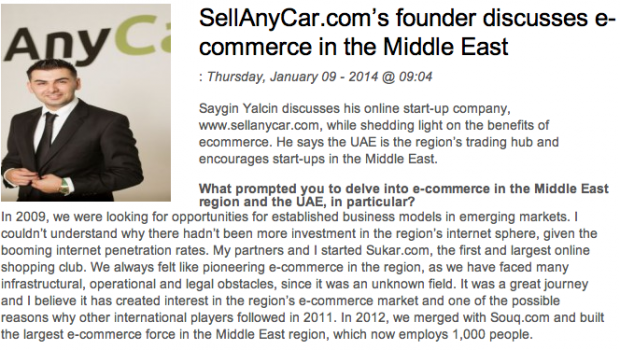 Published on January 9th, 2014 | by SayginYalcin

Saygin Yalcin his online start-up company,www.sellanycar.com, while shedding light on the benefits of ecommerce. He says the UAE is the region’s trading hub and encourages start-ups in the Middle East.

What prompted you to delve into e-commerce in the Middle East region and the UAE, in particular?

In 2009, we were looking for opportunities for established business models in emerging markets. I couldn’t understand why there hadn’t been more investment in the region’s internet sphere, given the booming internet penetration rates. My partners and I started Sukar.com, the first and largest online shopping club. We always felt like pioneering e-commerce in the region, as we have faced many infrastructural, operational and legal obstacles, since it was an unknown field. It was a great journey and I believe it has created interest in the region’s e-commerce market and one of the possible reasons why other international players followed in 2011. In 2012, we merged with Souq.com and built the largest e-commerce force in the Middle East region, which now employs 1,000 people.

What prompted you to start a car-selling website (www.sellanycar.com) in the UAE? Was there something significant that pushed you to this idea?

We believe that the experience of selling a used car in the region is broken. Selling your car must be quick, convenient and fair. We guarantee to buy your car within 30 minutes. We are located in every major city throughout the country and take care of all of the paperwork, even if your car is still financed with a bank. We have the purchasing power to buy any car at a competitive price and justify our margins with a low cost and a high volume of deals. Our entire service is 100 per cent free. We inspect your car and give you a fair offer with a validity of seven days.

What is the significance of having the roots of SellAnyCar.com placed in the UAE? Will you be expanding into other countries of the Middle East region?

The UAE is the region’s trading hub. The used car market in the country is a $2 billion business. Moreover, it is a market that grows 15 per cent on a yearly basis. SellAnyCar.com is already one of the largest used car dealers in the region and continues to grow.

Considering the typical scepticism that comes along with online shopping and especially the common hesitations that come along with buying a car, how would you confirm the validity of SellAnyCar.com? How are you selling this idea in the UAE? What is the method of payment used?

Selling a car can be a really annoying and complicated process; both time and power consuming for car owners. Private sales are often a choice for many sellers. This usually accrues significant costs, while a return cannot be guaranteed, regardless of whether you advertise your car via print advertisement or through an online marketplace. Apart from the direct advertisement costs, private sales cause serious further expenses. Selling your car privately to a consumer means that you are obliged to give a six-month warranty on the road-worthiness of the sold car – a risk many people are not aware of. Another option might be selling your car to a dealership.  We do not ask for any personal information on our website, apart from your email. So, there is no transfer of any sensitive data.

What is your expansion plan for the future? Will you be sticking to e-commerce or will you delve into other domains?

We will serve the entire Middle East region, including Turkey by the end of 2014. We are expanding into all of these countries at rocket speed. We will stick to our core competencies and business.

What would your advice be to young and aspiring entrepreneurs?

If you have an entrepreneurial spirit, follow it consistently. The Middle East region is full of opportunities. Look at what works in other markets, see if it is successfully replicable and go for it. Research numbers, build a great business plan, don’t ever be slow, find a strong team, talk to investors and execute. Be the fastest.

Could you give four or five tips for entrepreneurs related to your sector?

I see a lot of entrepreneurs starting companies in the internet sphere. I also see the press picking up on related topics. This is a sign that the general population is trusting electronic transactions more and more. However, we are still lagging behind in venture capital. Regional investors are still reluctant to deviate from traditional sectors, such as real estate. The Middle East region is a gold mine for investments into the internet sphere. It would be a pity, if investors from other continents realize that before regional investors do. Entrepreneurs need to be aware of this situation.