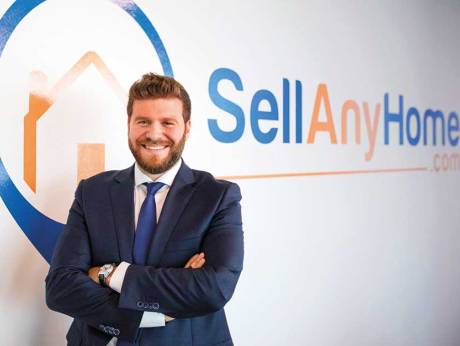 Dubai: When Omar Chihane tried to sell his house in 2016, it wasn’t a positive experience.

Whilst estate agents had contacted him, and there had been “many viewings” of his property, ultimately nothing came of it. Then, suddenly, someone made an offer over the phone out of nowhere. The next day, they made the transfer.

It turned out, Chihane said in an interview with Gulf News, that the buyer was a real estate investor, and from there an idea was born.

Fast forward a year, and Chihane is the co-founder and CEO of SellAnyHome.com, a new website that launched last week.

The business itself, despite being accompanied by the somewhat implausible promise of being able to sell your home within 30 minutes, is simple.

Sellers, or home owners, go on to the website, they input basic information about their home, such as location, number of bedrooms, number of bathrooms, square footage and so on, and within 10 seconds, they have an approximate estimate of the value of their apartment of villa.

Following that, Chihane said, the seller books an appointment through the website with one of SellAnyHome.com’s offer consultants, who then visits the property and conducts a thorough appraisal, taking pictures and inspecting around 100 different points, such as water pressure.

“After the pictures are uploaded to the app, different buyers make offers within 30 minutes, and the seller receives the highest offer. There is no obligation for them to accept the offer,” Chihane said.

The new website is targeting professional real estate investors who, as per Chihane’s definition, range from individuals, who own four of five homes, to a fund that is investing in hundreds of properties.

“By signing buyers on to our platform, we are creating real market coordination, between those looking to sell, and those looking to buy. We are always looking to sign on more buyers, as ultimately it’s better for the seller,” Chihane added.

The entrepreneur adds that his company makes commission on the sale price, therefore it is in his best interest to ensure the highest possible price for the home owner. He declined, however, to state how many sellers he currently had signed on to the service, stating only that the company “was growing both its seller and its buyer pool substantially.”

Chihane noted that he believes the current experience for sellers and professional buyers is broken, a belief that motivated him to start his own business.

“So this is when I started speaking to Saygin [Yalcin, one of Dubai’s most pre-eminent technology investors, and the company’s chairman]” Chihane said.

Yalcin went on to invest in SellAnyHome.com, assisting Chihane in establishing the business.

So why would someone want to sell their house in 30 minutes?

“Some people just want to sell fast, some people don’t want the hassle of having visitors. They don’t want the time wasted trying to sell their home and the countless visits of uncommitted buyers,” Chihane said.

The company has recently completed its seed funding, a type of early stage investment designed to support new businesses until they start generating cash.

The company is making plans for a Series A funding round, a type of significant investment typically made by venture capitalists, he added.

Chihane is optimistic about the future: “We believe Dubai is an amazing market for us to get into, both as a tech start-up, and how amazing its real estate market is. There are a lot of massive projects, there’s Expo 2020, there’s a lot of opportunity. It’s a really lively market.”

“If I was in San Francisco, I would still pick Dubai to start this business,” he added.