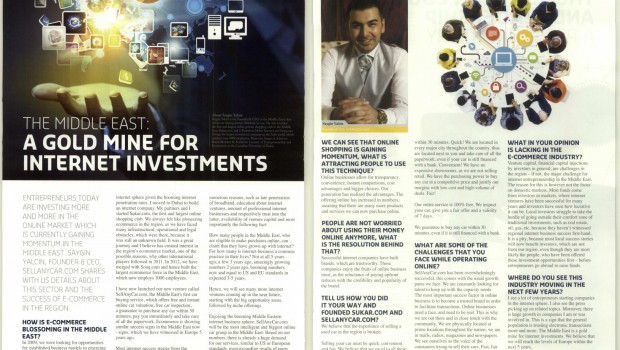 Entrepreneurs today are investing more and more in the online market which is currently gaining momentum in the Middle East. Saygin Yalcin, Founder & CEO, SellAnyCar.com shares with us details about this sector and the success of e-commerce in the region.

How is e-commerce blossoming in the Middle East?
In 2009, we were looking for opportunities for established business models in emerging markets. I couldn’t understand why there hasn’t been more investment into the region’s internet sphere given the booming internet penetration rates. I moved to Dubai to build an internet company. My partners and I started Sukar.com, the first and largest online shopping club. We always felt like pioneering ecommerce in the region, as we have faced many infrastructural, operational and legal obstacles, which were there, because it was still an unknown field. It was a great journey and I believe has created interest in the region’s ecommerce market, one of the possible reasons, why other international players followed in 2011. In 2012, we have merged with Souq.com and hence built the largest ecommerce force in the Middle East, which now employs 1000 employees.

I have now launched our new venture called SellAnyCar.com, the Middle East’s first car buying service, which offers free and instant online car valuation, free car inspection, a guarantee to purchase any car within 30 minutes, pay you immediately and take care of all the paperwork. Ecommerce is showing similar success signs in the Middle East now – signs, which we have witnessed in Europe 5 years ago.

Most internet success stories from the US and Europe, will repeat in the Middle East. However, there is a time-lag, due to numerous reasons, such as late penetration of broadband, education about internet ventures, amount of professional internet businesses and respectively trust into the latter, availability of venture capital and most importantly the following fact: How many people in the Middle East, who are eligible to make purchases online, can claim that they have grown up with internet? For how many is internet business a common practice in their lives? Not at all 5 years ago, a few 3 years ago, amazingly growing numbers 2 years ago, booming numbers now and equal to US and EU standards in expected 3-5 years.

Hence, we will see many more internet ventures coming up in the near future, starting with the big opportunity areas, followed by niche offerings.

Enjoying the booming Middle Eastern internet business sphere, SellAnyCar.com will be the most intelligent and biggest online car group in the Middle East. Based on our numbers, there is already a huge demand for our services, similar to US or European standards, even exceeding results of peers in mature benchmark markets, due to the strength of the regional automotive industry.

We can see that online shopping is gaining momentum, what is attracting people to use this technique?
Online businesses allow for transparency, convenience, instant comparisons, cost advantages and bigger choices. Our generation has realized the advantages. The offering online has increased in numbers, meaning that there are many more products and services we can now purchase online.

People are not worried about using their money online anymore, what is the resolution behind that?
Successful internet companies have built brands, which are trustworthy. Those companies enjoy the fruits of online business most, as the reluctance of paying upfront reduces with the credibility and popularity of the brand.

Could you please tell us how you did it your way and founded Sukar.com and SellAnycar.com?
We believe that the experience of selling a used car in the region is broken.

Selling your car must be quick, convenient and fair. We believe that we excel in all these 3 categories. We guarantee to buy your car within 30 minutes. Quick! We are located in every major city throughout the country, thus are located next to you and take care of all the paperwork, even if your car is still financed with a bank. Convenient! We have no expensive showrooms, as we are not selling retail. We have the purchasing power to buy any car at a competitive price and justify our margins with low cost and high-volume of deals. Fair!

Our entire service is 100% free. We inspect your car, give you a fair offer and a validity of 7 days. We guarantee to buy any car within 30 minutes, even if it is still financed with a bank.

What are some of the challenges that you face while operating online?
SellAnyCar.com has been overwhelmingly successful, this comes with the usual growth pains we face. We are constantly looking for talent to keep up with the capacity needs. The most important success factor in online business is to become a trusted brand in order to facilitate transactions. Online businesses need a face, and need to be real. This is why we are out there and in close touch with the community. We are physically located at prime locations throughout the nation, we are in malls, radios, magazines and newspapers. We see ourselves as the voice of the consumers trying to sell their cars. Fast, fair and everywhere.

What in your opinion is lacking in the e-commerce industry?

Venture capital, financial capital injections by investors in general, are challenges in the region – if not, the major challenge for internet entrepreneurship in the Middle East. The reason for this is however not the focus on domestic markets. Most funds come from investors in markets, where internet ventures have been successful for many years and investors have seen how lucrative it can be. Local investors struggle to take the hurdle of going outside their comfort zone of traditional investments, such as real estate, oil, gas, etc, because they haven’t witnessed regional internet business success first-hand. It is a pity, because most local success stories will now benefit investors, which are not from our region, even though they are most likely the people, who have been offered these investment opportunities first – before entrepreneurs go abroad to raise funds.

Where do you see this industry growing in the next few years?
I see a lot of entrepreneurs starting companies in the internet sphere. I also see the press picking up on related topics. Moreover, there is huge growth in companies I am or was involved in. This is a sign that the general population is trusting electronic transactions more and more. The Middle East is a gold mine for internet investments. We believe that we will reach the levels of Europe within the next 5 years.

Saygin Yalcin is the Founder & CEO of the Middle East’s first online car buying service, SellAnyCar.com. He also founded the first and largest online private shopping club in the Middle East, Sukar.com, and is Partner at Jabbar Internet and Souq.com Group, the largest ecommerce company in the Arab world, which employs over 1000 employees. Moreover, Saygin is Advisory Board Member & Academic Lecturer of Entrepreneurship and Ecommerce at the Canadian University of Dubai. 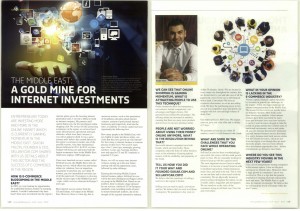