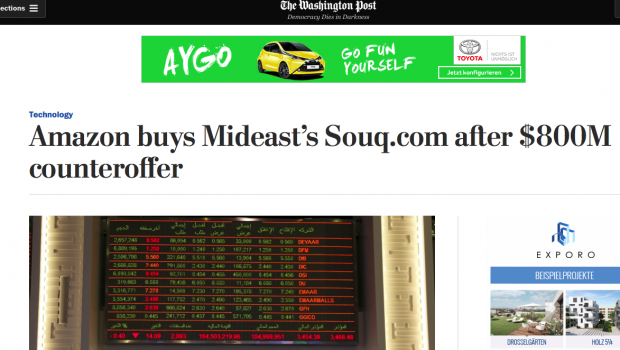 A joint statement described the purchase as expanding Amazon’s influence into the Mideast as the chairman of the state-supported firm Emaar prepares to launch his own retail website in a country known more for its luxury malls than online shopping.

That could put Seattle-based Amazon in a head-to-head competition with a firm helmed by one of the sheikhdom’s favored business magnates.

“This is a milestone for the online shopping space in the region,” Souq.com co-founder and CEO Ronaldo Mouchawar said in a statement.

The announcement said the two companies expect the sale to close this year.

“Together, we’ll work hard to provide the best possible service for millions of customers in the Middle East,” Russ Grandinetti, a senior vice president at Amazon, said in a statement.

In buying Souq.com, Amazon will leapfrog into the crucial Mideast markets of Egypt, the United Arab Emirates and Saudi Arabia, where the Dubai-based retailer already has local operations.

As a private company, Souq.com hasn’t had to file public earning reports, though the website last year raised more than $275 million in a round of financing that the company said would help fuel its future growth.

Souq.com’s status as a free-zone firm also means Amazon will be able to run a 100-percent foreign-owned operation. Amazon’s entry into the UAE comes after Apple Inc. opened its first stores in the Arab world in Dubai and the UAE capital of Abu Dhabi in October 2015.

Rumors about Amazon’s interest in Souq.com have circulated for months. In November, Emaar chairman Mohamed Alabbar reportedly met Amazon CEO Jeff Bezos at the state-backed firm’s cavernous Dubai Mall, home to a massive aquarium and in the shadow of the Burj Khalifa, the world’s tallest building it built.

On Monday, Emaar Malls PJSC made public its $800-million bid for Souq.com in a filing on the Dubai Financial Market. The short filing, signed by Emaar Malls vice chairman Ahmad Thani al-Matrooshi, said the bid was made “in line with the strategy to align e-commerce with physical shopping.”

Last year, Alabbar received a $1 billion investment in a forthcoming e-commerce venture from the Saudi government’s Public Investment Fund, the same sovereign wealth fund that invested $3.5 billion in the ride-hailing app Uber. That project, called noon.com, has yet to begin operations.

Alabbar also holds stakes in the delivery company Aramex, which could prove useful for his online retailer.

Dubai, the commercial capital of the United Arab Emirates, home to the long-haul carrier Emirates and the world’s busiest international airport, also has luxury malls that even include an indoor ski slope. Its summer heat of over 50 degrees Celsius (122 degrees Fahrenheit) makes malls a major attraction for both shopping and leisure time in the city.

While Uber and other online services firms work in Dubai, online retail shopping has yet to truly take off like it has in Western countries. Amazon’s entry into the market likely will change that.