Published on August 5th, 2015 | by SayginYalcin

If you would like to go big fast (now), have a big idea (billion dollar market, hundred million dollar company potential), have a great team (smart, passionate), need money (millions) and don’t have it (normal), then it might make sense to look for VCs.

Usually a Venture Capital fund (or a limited partnership) is partly owned by the General Partners, who are managing the Venture Capital firm, its fund and investments, and by the Limited Partners (the Investors), who could be public pension funds, fund-of-funds, corporate pension funds, insurance companies, high-net-worth individuals, family offices, endowments, foundations, sovereign wealth funds, or others.

The average likelihood that your business plan gets a serious look is 10%, while only 1% will get funded. Nevertheless, an investment decision consists of several factors, including the analysis of market, product, team and financing risk.

If institutional investors are unsure of a region’s socio-economic environment, they cannot make rational decisions. They can try to minimize information deficits by gathering data, if available, or invest in local organizations, which can serve as proxies. Hence, a rising trend we are seeing in the Middle East is that certain, pioneering VC funds from mature markets, such as the US or UK are investing into local VC funds or operators to acquire regional experience, avoid opening offices and dedicating human resources into cumbersome research of details of each market and business opportunity in the Middle East.

Looking at the world’s hotbed for VC, the US (Silicon Valley being on top), venture capitalists invested USD 17.5b in 1,189 deals in the second quarter of 2015. Investment increased 30% in terms of dollars and 13% in the number of deals, compared to the first quarter when USD 13.5b was invested in 1,048 deals.

With 491 deals, the software industry continued to receive the highest level of funding of all industries, increasing 30% from the prior quarter to USD 7.3b in Q2 2015, which is the largest quarterly investment going into software companies in 20 years.

Investments into Internet-specific companies are at the highest level since the first quarter of 2001.

The MENA region sees significant growth in VC investments as well, despite geo-political challenges. However the region’s VC landscape remains tiny compared to global mature markets. The number of VC deals being as low as 20 transactions during the financial crisis, has found its peak in 2011 and 2012, tripling to over 60 transactions. While 2013 was a relatively quiet year, 2014 has seen a significant increase to bounce back to 2012 levels and amounting to close to USD 1b invested. Half of these investments were placed in the IT sector.

All in all, I believe that the MENA region is a gold mine for VC, especially internet-focused investments. Several governments are embracing and supporting SMEs. Especially, the GCC with the UAE being the pioneer in the Middle Eastern tech scene, is super attractive for foreign investments, given its tax-free environment and vision for entrepreneurship support. In a region plagued with high unemployment, we have the responsibility to create 100m new jobs by 2020 to just maintain our current rates. Only SMEs can achieve this. At the same time, we have the opportunity to embrace the potential our young populations have by creating infrastructures, which enable entrepreneurship, such as the introduction of bankruptcy laws, strong credit history and judicial systems, SME loans by central banks at low prices, entrepreneurship-focused education and promotion of regional VC, especially in the internet segment. 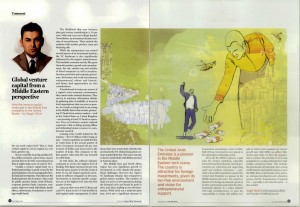