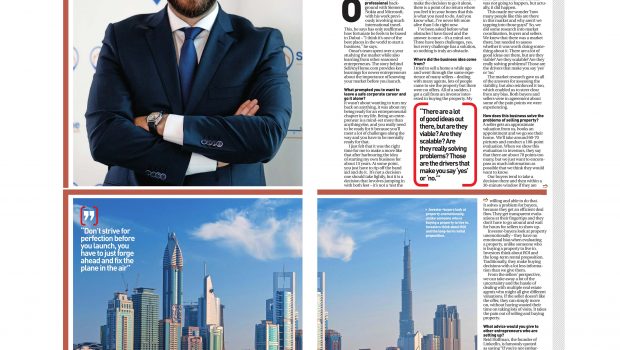 Published on October 5th, 2017 | by SayginYalcin

SellAnyHome.com was launched in August this year by the firm’s CEO, Omar Chihane, who is already revolutionising the way investors purchase property.

Omar stems from a professional background with Siemens, Nokia and Microsoft, with his work previously involving much international travel.

This, he says has only reaffirmed how fortunate he feels to be based in Dubai: “I think it’s one of the best places in the world to start a business,” he says.

Omar’s team spent over a year studying the market while also learning from other seasoned entrepreneurs. The story behind SellAnyHome.com provides key learnings for newer entrepreneurs about the importance of knowing your market before you launch.

What prompted you to want to leave a safe corporate career and go it alone?
It wasn’t about wanting to turn my back on anything, it was about my being ready for an entrepreneurial chapter in my life. Being an entrepreneur is a mind-set more than anything else, and you really need to be ready for it because you’ll meet a lot of challenges along the way and you have to be mentally ready for that.

I just felt that it was the right time for me to make a move like that after harbouring the idea of starting my own business for about 15 years. At some point, you just have to rip off the band aid and do it.  It’s not a decision one should take lightly, but it is a decision that involves jumping in with both feet – it’s not a ‘test the water’ kind of decision.

When you make the decision to go it alone, there is a point of no return where you feel it in your bones that this is what you need to do. And you know what, I’ve never felt more alive than I do right now.

I’ve been asked before what obstacles I have faced and the answer is none – it’s a mind-set. Three have been challenges, yes, but every challenge has a solution, so nothing is truly an obstacle.

Where did the business idea come from?
I tried to sell a home a while ago and went through the same experience of many sellers – dealing with many agents, lots of people came to see the property but there were no offers. All of a sudden, I got a call from an investor interested in buying the property. My knee-jerk reaction was that this was not going to happen, but actually, it did happen.

This made me wonder ‘how many people like this are there in this market and why aren’t we tapping into those guys?’ So, we did some research into market coordination, buyers and sellers. We knew that there was a market there, but needed to assess whether it was worth doing something about it. There are a lot of good ideas out there, but are they viable? Are they scalable? Are they really solving problems? Those are the drivers that make you say ‘yes’ or ‘no.’

The market research gave us all of the answers for assessing the viability, but also reinforced it too, which enabled us to steer clear from any bias. Both buyers and sellers were in agreement about some of the pain points we were experiencing.

How does this business solve the problems of selling property?
A seller gets an approximate valuation from us, books an appointment and we go see their home.  We’ll take around 60-70 pictures and conduct a 100-point evaluation. When we show this evaluation to investors, they say that there are about 70 points too many, but we just want to encompass as much information as possible that we think they would want to know.

Our buyers tend to take a decision there and then within a 30-minute window if they are willing and able to do that. It solves a problem for buyers, because they get an efficient deal flow. They get transparent evaluations at their fingertips and they don’t have to go around and wait for hours for sellers to show up.

Investor-buyers look at property unemotionally – they have no emotional bias when evaluating a property, unlike someone who is buying a property to live in. Investors think about ROI and the long-term rental proposition. Traditionally, they make buying decisions with a lot less information than we give them.

From the sellers’ perspective, we can take away a lot of the uncertainty and the hassle of dealing with multiple real estate agents who might all give different valuations. If the seller doesn’t like the offer, they can simply move on, without having wasted their time on taking lots of visits. It takes the pain out of selling and buying property.

What advice would you give to other entrepreneurs who are setting up?
Reid Hoffman, the founder of LinkedIn, is famously quoted as saying “If you’re not embarrassed by the first version of your product, you’ve launched too late.” For us, this meant getting to a point where we felt we were around 80% ready to launch. I’ve learned that you need to get yourself to a certain point of readiness, then just go ahead and do it. Don’t strive for perfection before you launch, you have to just forge ahead and fix the plane in the air.

The other hugely important point is approaching your market research seriously.  We really studied the market, the ecosystem, the players; we interviewed sellers, agents and buyers, and gained a thorough understanding of the size of the market, and other factors, then off we went. This process took over a year to really understand the landscape after both passive and active studying.

Market analysis isn’t something that happens overnight and leaving a corporate environment to start-up meant that I wanted to cover as many angles as possible to ensure the success of the business. 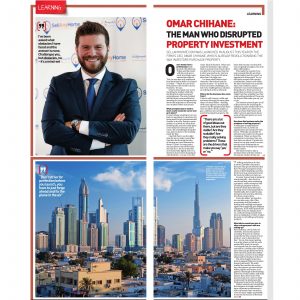